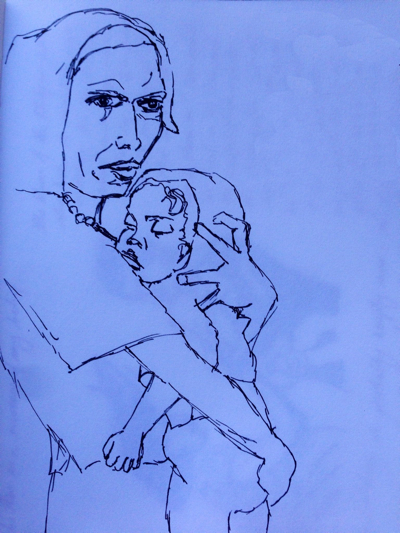 As of this morning, the official count of those who have died in the Philippines stands at 1,800.  It’s a faceless number, a mere estimate, and it will rise.  Yesterday I went to the New York Times website and looked at the photos.  I tried drawing some of them.  Then, in the evening, I celebrated the Eucharist at Bexley Hall.  I couldn’t say the words of the Eucharistic prayer without thinking about the faces that I saw.  The man, his body bent to the curve of the child he held against his chest, as the wind whipped across his hair and his wife placed a hand on her child’s back, her clothes billowing towards him, possibly a final gesture.  Today I woke and read on CNN’s website about a woman who took refuge with her husband and six children in a bus.  They were swept away by the storm, while she survived.  She’s wandering through the ruins of Tacloban, looking for their bodies.

In 2011, when 30,000 children starved to death because of a draught in East Africa, I was barely aware of it.  When 6.9 million people were displaced because of the monsoon floods in India in 2012, I didn’t pay much attention.  I, like so many other people, can’t wrap my head around the numbers, or put faces to them.  And each escalating disaster serves to inoculate me against compassion.  People are always dying, suffering, grieving, and it doesn’t feel like there’s much I can do about it.

But losing my grasp on my compassion is a step towards total acquiescence to a sinful world, a studied willingness to enjoy my health and prosperity now, without worrying about those who suffer because of it, or what might happen tomorrow.  I believe that we need societies that pay attention and care, if we are to be capable of making the changes that could help us all survive.  A dispassionate society is one that’s blind to the future and indifferent to the present, and I belong to that substance-less kingdom more than I belong to the Kingdom of God.  But I want to belong to the Kingdom of God, and I want the world to survive.  Training my compassion is the first spiritual step to taking action and aligning myself with Jesus’s vision of the kingdom.

And so I draw.  Yesterday I sat and stared at the face of a displaced woman, clutching her sleeping child to her chest.  I took my pen and tried to capture the dark worry in her eyes, the shock, the slight hardening that happens to those who wait.  I drew the man who curved his body to the shape of his child as his wife reached towards him.  I noticed, as I drew, that the man was holding a water bottle, and I realized that the picture was taken four days ago, and that there’s a terrible shortage of drinking water now.  That bottle means life to the child the man is cradling, and the water is almost certainly gone.  I drew, even though it hurt to consider these things, and it still hurts.  But if I am going to be a man who prays, who dares to stand before God and touch bread and wine in the way that Christ did, I have to allow the world to hurt me, and to feel my own sense of sin.  I have to try to move beyond the comfort of my prayers into that same wilderness of loss and searching that the woman in Tacloban walks through as she searches for the bodies of her husband and her six children.  So I draw as a training in compassion, knowing how little it means, but hoping it will change me.

Posted in Featured, Who We Are and tagged with compassion, global climate change, natural disaster, Philippines, typhoon. RSS 2.0 feed.