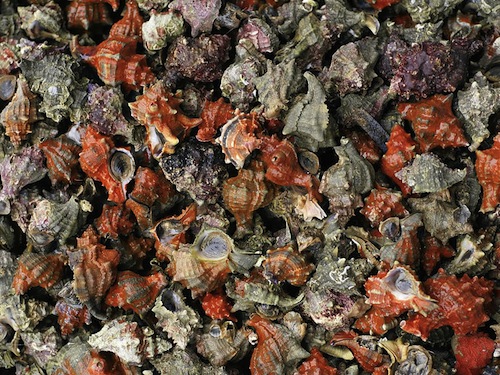 I’ve been thinking a lot about Lydia lately, her background, and the hospitality she offered to Paul on his journey.

It all started with a tangent about murex shells.

You see, I didn’t start my life in the non-profit sector.  My passion consisted of Roman archaeology.  Most of my year took place in dingy classrooms, my nose pressed to worn, antiquated books, desperately trying to syphon some sort of knowledge into my brain; summers, on the other hand, were spent in dirt trenches, slowly excavating villas and temples ten centimeters at a time in the hot Mediterranean sun.  I loved what I did, loved uncovering the lives of people who existed two thousand years ago and yet were so similar to us in so many ways.

So, naturally, whilst reading Acts 16 for the umpteenth time, the archaeologist in me wondered about the process of dying purple fabric, a procedure with which I was rather familiar in grad school, as a fellow student wrote her whole masters’ thesis on the subject.  It’s really the worst job you could have in the Roman world (aside from fullers, who used vats of urine to clean the woolen cloth).  One little murex shell only made about a drop of purple dye, and the process was so smelly that workshops had to be located a good distance from the town so that the people didn’t have to smell the awful process every day.  Even modern archaeologists who are geeky enough to try the process themselves have said that it produces such a foul smell that they can barely make it through without wanting to vomit.  Suffice it to say, it wasn’t a glamorous job.  But because of the process, and how many shells it took to dye one piece of fabric (we’re talking thousands), purple fabric was an expensive commodity.  It was so valuable that you could tell what social rank someone was based on the amount of purple they wore: for example, for a while, the only people who were allowed to wear fabric that was completely dyed purple were emperors or deities.  Only senators and priests or priestesses were allowed to wear purple borders or stripes on their otherwise white clothing.  This is how valuable the fabric was.

Thinking about purple dyers made me wonder what else we can find out about Lydia.  We know she somehow worked with purple-dyed cloth, and that she had some sort of home she could welcome travelers to.  What else can we tell about her life?  Is there anything else in her story we might be missing?

Now, the word used in Acts to describe Lydia does not indicate that she is actually a dyer (lucky for her!).  The adjective in Latin, purpuraria, or its corresponding work in Greek, πορφυροπώλης (porphyropolis), means “dealer in purple.”  People who dyed cloth rarely sold the cloth at markets–dying was a full-time job (plus, I doubt anyone would buy cloth from someone who smelled so horrible!).  There are carvings in tombs of textile merchants that actually shows the weavers of cloth bringing their product to merchants to inspect.

It’s more likely that Lydia got the cloth from somewhere, and sold it herself.  It wasn’t unheard of for women to be merchants, especially in the town’s market place or in shops that lined the streets.  It was frequently a family business, so everyone would be involved in selling (women included), and often the store-front was attached to the home of the seller.  That’s probably the sort of building Paul would have been invited to.

Okay.  So Lydia sold valuable cloth.  She probably had some sort of weavers she got the fabric from.  None of this is really new information.

But what about her name? We have no recorded last name for Lydia.  While this might not be a big deal for us, it was in the Roman world.  Romans had three names, kind of like us, and it was important to have a family name.  Family names indicated your clan, yes, but they also indicated how long your family has been around.  The Julian clan, the family Julius Caesar belonged in, was one of Rome’s oldest, wealthiest families.  Belonging to that family gave you instant status.  The only people who didn’t have family names were slaves, or people who were formerly slaves.

The naming of slaves is also interesting, and a little sad, because they frequently were just named by Roman slave auctioneers after the place they came from.  We know that Lydia comes from Thyatira, part of the territory of the area known as Lydia, located in modern Turkey.  The fact that Lydia comes from the area of Lydia, and has no last name, means she probably was a slave at some point, and that the slave auctioneer couldn’t think of any other name from her aside from the country she came from.

But since Lydia seems to have her own business, or at least be a merchant, we can safely assume she is now a freed person.  In the Roman world, slaves could be freed.  They could save up enough money to buy their freedom, or often their owners would free them themselves.  Some Romans even married their former slaves.  Frequently, slaves would learn the trade of their owners, and then, once freed, continue to work in that trade, usually as a sort of employee of their former-owner.

It just so happens that Thyatira was known in the Roman world for being one of the best places for purple fabric.  Kind of like how Cincinnati is known for being great for chili.

Phew. Okay.  That was a lot.  You can see how my inner-Roman-archaeologist is showing.

But what does this mean for us?  Why does it matter who Lydia was?

For me, the more I mull on Lydia, the more inspired I am by her story.

Lydia came out of servitude, was brought to a land hundreds of miles away from her home town, lived in this city for an unknowable amount of time, gained her freedom, and made a life for herself.  Though she would definitely not be considered upper class, or even upper-middle class, she is doing pretty well for herself considering where she came from.

Based on this, most prominent Romans would have expected her to fully embrace the Roman attitude of accumulating as much wealth and status as possible.  You see, status was everything to the Romans, and many would call you crazy if you did anything but strive to climb the social ladder.

Lydia, however, doesn’t seem to care about status.  She is described as “colens Deum,” or caring for God.  We know that at this time, being a Christian was really unpopular with the Roman government: Nero had persecuted Christians, and there was a constant question of what exactly to do with people who refused to acknowledge the emperor as a god.  Lydia already has one strike against her for this reason. But instead of striving to make up for this, and to tenaciously hold on to whatever status she has, she asked Paul and his companions to stay at her house.  Paul who, although he is a Roman citizen, is not highly regarded by those in power.  Paul and his companions, who were known in that region for actively speaking about this new religion which defied the imperial Roman government in many ways.

Lydia was housing someone in active rebellion against the Roman government and imperial cult, and she not only didn’t care, she asked him to judge her as being faithful to God, the God which the emperor was trying to squash.

For this reason, Lydia doesn’t only represent someone who provides hospitality for those who need it; she represents a woman whose faith and love for God calls her to something much bigger than this world.  Lydia doesn’t seem to be concerned with social expectations and customs of her time if they hinder her from serving God and His people.  She sees an opportunity, one which could get her into a lot of serious trouble with very influential members of the Roman world, and takes it.  She doesn’t take time to rationalize the pros and cons, considering her potential arrest or the sacrifice of status for associating with such delinquents.  Rather, she hears Paul’s words, is convicted to not only get baptized but also baptize those living with her, and does whatever she can to help Paul in his journey.

I hope and pray that as a community, we continue to strive not only to provide hospitality for those in need, but also to complete God’s work in the face of whatever obstacles our culture and society throw against us.  Hospitality for the homeless is not always seen as a worthwhile endeavor, especially when it involves sacrificing our own wealth and status in order to help others get back on their feet.  May Lydia continue to be an example for those who desire to serve God’s people and follow Jesus even when our world tries to hinder us.

My amazing Latin skills (hurray for using my degree!) 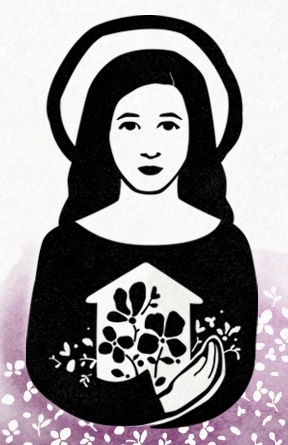