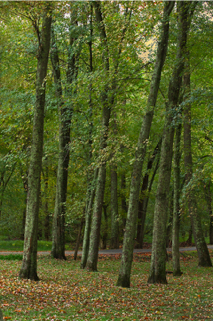 The seeds fell out of the sky into crevices in the land.  And thus the seeds made a commitment for life to this place.

Long lives began from such tiny seeds, invisible in their crevices.

An opening appeared in the woods and the gentlemen felt the Star’s light directly.  The trees began to lean into the Star’s steaming light, yielding to each other this way and that, as they rose toward the Star.

They became a dignified stand of trees, with integrity and a generosity to lean and give way for their companions.

Lichens, mosses, and tiny creatures were welcomed into their own crevices of bark.

The noble integrity of the gentlemen holds the soil securely for their neighbors below, hidden amidst the soil at their feet.

These gentlemen witness my desire for these last precious years of my own life:

That I live with such generosity and self-forgetfulness to give away what I have been given until I disappear into the ground of my being.