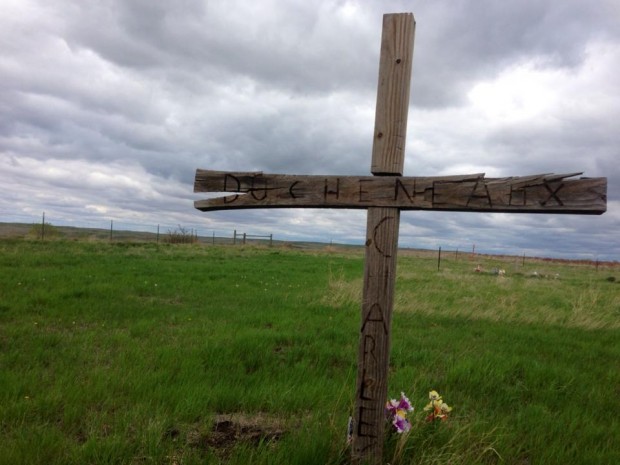 In the face of death there are no fancy titles.  It is simply Good Friday.  St. Paul called the
cross foolishness in 1st Corinthians.  Those that remained at the foot of the cross were utter fools: Mary Jesus’ mother, John his beloved disciple, a few other women, and a centurion bold enough to proclaim Jesus as the Son of God.  It was quite a different assortment of people than those who are gathered Jesus most of the time.  Gone were ten of the Twelve and gone were the Seventy.  Gone were the hungry masses who couldn’t buy the message Jesus was selling.  Gone were the testing Pharisees intent on debating with him.  Jesus has been hung on a tree and there was no greater dishonor.  Who would be at the foot of the cross save the foolish still blinded by love and awe?

It would only be after Good Friday, Holy Saturday, and then Holy Pascha that we, both the foolish and those that flee could be comforted.  For our sake he was crucified under Pontius Pilate; he suffered death and was buried.  But in the moment, there would just be shock and a desire to protect yourself.  Peter went so far as to deny Christ three times.  But, as seen above, some elected to push past the shock and stand at the foot of the cross and confess Jesus as the Son of God, the Son of Love.

Today still people foolishly elect to stand at the foot of cross and foolishly perform acts of love in a world consumed by selfishness, fear, aggression, and avarice.  We saw this in Kiev when the Ukrainian crisis began.  Orthodox clergy stood between protesters and soldiers proclaiming peace in a place where it is sorely needed.  Such foolishness.

That is a global example of such foolishness but we can look closer to home.  I have witnessed so many endeavors here in Cincinnati that by all accounts is utter foolishness.  Little Sisters of the Poor, Open Door, Jimmy Heath House, Drop In Center, Lydia’s House, and the Episcopal Retirement Homes are just a few.

In Lydia’s House you find three women (one a friend and Lydia’s House’s intern) who have decided to refurbish a home in West Norwood and then open it to displaced women and their children.  There donations have been strong to date but they live donation to donation, grant to grant.

The same can be said of the Little Sisters of the Poor.  This Catholic order of sisters was started by Jeanne Jugan who was called to work for the elderly poor.  In Cincinnati the sister’s have made a nursing home for the poor of the city.  At the end of every fiscal year they have a zero balance in the checking account.  Jugan believed in radical solidarity with poor.

Open Door operates out of Church of the Advent in Walnut Hills.  It has been a ministry devoted to assisting the mentally ill and low income families since 1973.  They do this with bill assistance, a food pantry, and an Ohio Benefit Bank.

Cincinnati’s Over the Rhine has no shortage of poor and displaced peoples.  The area is both wonderfully and tragically being redeveloped.  The Jimmy Heath House and the Drop In Center remain two of the few services left in the area to help the those displaced people.  Too often conversations about their sustainability and their ability to remain in gentrified Over the Rhine sounds like warfare and battle strategy sessions.  I don’t wish to vilify the gentrification or make these two services out to be victims fighting a losing war.  Instead they are simply fools at the foot of the cross, the cross where love was crucified.  They are in the eye of the storm, a storm of fear and doubt.

The people of the Episcopal Retirement Homes are equally foolish.  They went from the business of high income retirement homes of their first buildings, Dupree House and Marjorie P. Lee, to St. Paul Village, St. Pius Place, and other low income retirement homes both here in Cincinnati and in Dayton.  Their foolishness continues as they plan for more low income retirement homes here in Cincinnati, Northern Kentucky, Southern Indiana, and Columbus.  And they two live in the eye of the storm.  Will they have enough volunteers for this event or that?  Will this resident re-qualify to stay another year?  How will this change or that to Section 8 or HUD housing regulations change how the residents live and the employees work?

And they give me a runner who would have been like the disciple who fled naked when Jesus was arrested the courage to pass through the storm to the center and sit at the foot of the cross where we can be fools of Christ together.  Amen.