What do our faith communities need to learn about in order to better serve the world around us?  Twenty-four clergy and lay leaders gathered in April of 2014 to answer this question and form a new group in Columbus that we dubbed “The Ministerium of Ideas.”  It’s the outgrowth of a community that had met for almost forty years, gathering on Friday mornings to listen to talks given by Ohio State University professors.  This group thought of itself as “the Church listening to the University,” and I started attending the talks in 2012, when I became Missioner for Campus Ministry.  I was attracted to the group for several reasons, the first being the graciousness of Bob Russell, who organized the talks.  Bob is in his eighties, long retired from being a Presbyterian campus minister, but still deeply curious and connected to the life of the campus.  He, and his efforts, reiterated to me one of the most important aspects of campus ministry these days.  The Western tradition of higher education came out of the church, and church and academy have long had a symbiotic relationship.  The academy provides the church with new knowledge and ways of thinking about a changing world.  The church spurs the academy to think ethically about new discoveries, and prophetically calls it to return to its original purpose of nurturing the human soul, educating the characters of young people, and making the benefits of its discoveries available to all.  Campus ministry acts as a bridge between the church and the academy, and the talks that Bob Russell organized for so many years showed me a way to strengthen that bridge and widen it’s reach.

The twenty-four clergy who gathered in April to answer that initial question were from a variety of mainline denominations, and from the Jewish and Buddhist faith traditions as well.   We ate lunch together and switched seats every fifteen minutes, using a World Cafe format for our discussion.  Our initial question generated many more questions.  How do we build diverse communities?  Are we failing at critical thinking?  What would it be like to participate in communities of creation instead of communities of consumption?   What are the armageddon type fears of the moment?  What will it be like to create bridges between physical & tech-based communities?  We asked many more questions, but of all the questions we asked, the one that touched me most deeply was, “how do we even define our current culture?”

It became clear to me that many of us were feeling bewildered by the rapid changes in the world around us, many of which are technology-induced.  Many of us felt unmoored, unable to make sense of a world where communities are virtual, religiosity is declining, consumerism seems to have become definitional to the human race, and only utilitarian values seem to matter.  And it occurred to us that if we felt this way, most of our congregants probably did as well.  The beauty of that question, “how do we even define our current culture,” was that we all suddenly realized that we weren’t alone.  The terror of that question was that it seemed so huge, something that would take years to answer, even as the culture transitioned beyond whatever temporary answers we could arrive at.

After the luncheon, I was joined by Bob Erickson and Jim Miner in putting together a schedule of talks that would begin to explore at least some of our questions.  Over this past academic year we heard about collaborations with the STEM disciplines (science, technology, engineering and math), learned about institutions that have changed to meet the needs of their changing neighborhoods, explored the intersection of religion and the imagination, and investigated end of life issues.  We considered ways of cultivating a culture of reverence, asked whether it’s possible to live lives that aren’t centered around the economy, practiced reading the voice of our culture, and played with different models of religious community.  Each of these talks generated as many questions as they answered, but as our last speaker, Ben Norton, said, faith is a journey, not a set of certainties.  Over the course of this past year, we came to realize that listening to the voice of the university is a faithful act, one that expands our understanding and helps us address the urgent questions of our parishioners and neighbors. 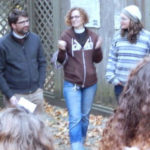 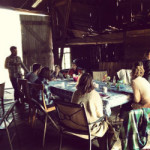 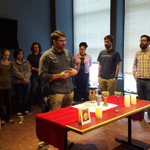 Sing to the Lord a New Song! A Reflection on the Province V Gathering in Chicago 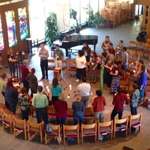 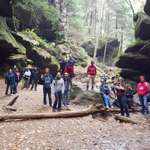 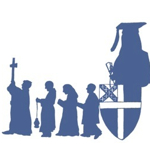